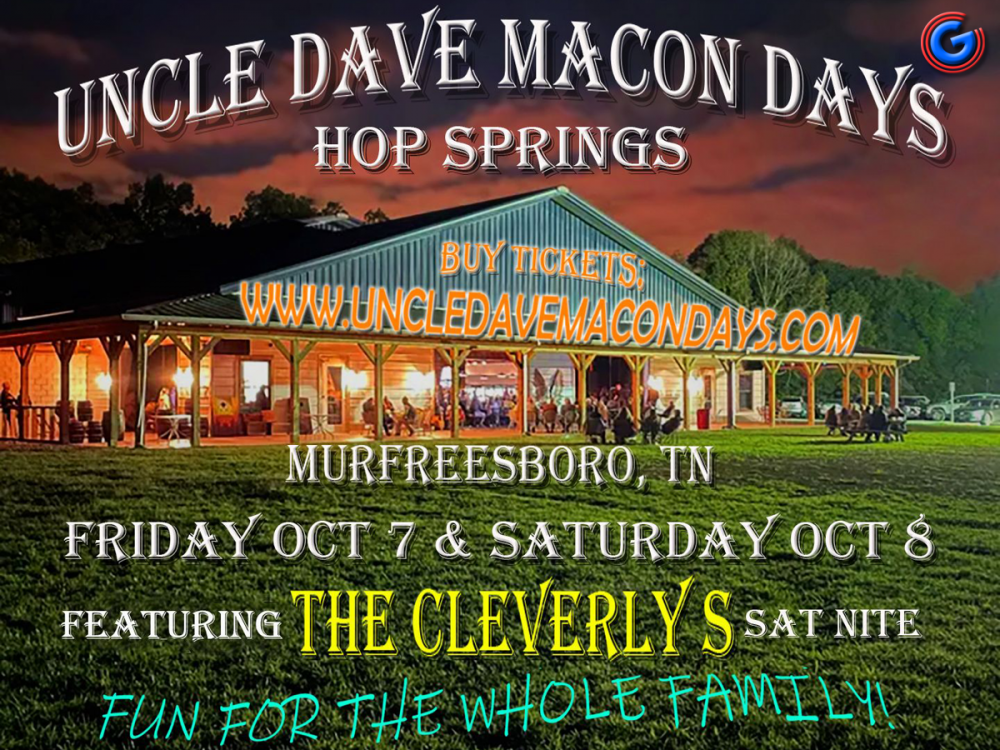 To buy your tickets now, go to https://uncledavemacondays.com/tickets/

Uncle Dave Macon Days announces the Early Bird Special for those roots music enthusiasts who want to seize the moment and start the celebration at the new venue in Hop Springs. The long-awaited moment is finally here. The launch will kick off Friday evening and feature Glade City Rounders, Jake Leg Stompers, and Uncle Shuffelo and His Haint Hollow Hootenanny. Saturday October 8, performances will highlight The Will MacLean Band, Caleb Christopher Edwards, Jake Leg Stompers and The Cleverlys.

Don’t miss the opportunity to propel roots music into a surreal experience at this pristine location at Hop Springs.  Near the eastern edge of Rutherford County on the border of Cannon County is where the front porch, mill gathering, shade tree, and parlor pickin’ occurred in the 19th and early 20th century. It is there that the serene vistas draw you into a magical, back-in-time place. Uncle Dave Macon’s homeplace is a stone’s throw away. In the 1920’s, Uncle Dave Macon was the first superstar of the Grand Ole Opry.

Starting from humble beginnings on the lawn of the Rutherford County Courthouse in 1978, Uncle Dave Macon Days has been a Middle Tennessee tradition. The festival is reaching new heights partnering with Hop Springs in the beautiful 83 acre rolling hills, a place for growing the festival into the 21st century.

This is a don’t miss opportunity! Buy your tickets now at www.uncledavemacondays.com

3.) NEW Goodness Gracious Restaurant Opens at the Fountains at Gateway